CLOSED: This discussion has concluded. 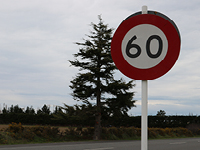 You can view the speed limit changes to 27 local roads on Council’s online interactive map or read the list of affected roads.

The 27 local roads have been identified because they have:

When will speed limits change?

Speed limit changes on these roads will be in force and new signs installed by December 2021.

My road isn’t included, but I would like its speed limit reviewed.

The Council is consulting on the proposed changes on these 27 local roads only at this stage rather than seeking additional changes.

Under the new national regulations (Setting of Speed Limits Rule), we will need to produce a speed management plan for the district. We plan to engage with the community when we start developing the plan and you will be able to make submissions on any speed limits at this time. We expect to start this process in early 2022.