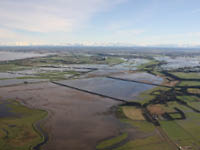 Selwyn is a district with a rich and diverse environment which is also exposed to a number of natural hazards.

The Proposed Selwyn District Plan - currently out for public consultation - maps natural hazards areas across Selwyn, based on the latest data and to meet regulatory requirements.

“It’s important that we know what natural hazards we face in the district, so that we can make informed decisions on future property, land and infrastructure development”, says Council Planner Rachael Carruthers. She’s one of the team of planners who has developed the Proposed District Plan.

All councils in New Zealand are required to identify and manage areas at risk from natural hazards.

“All councils in Canterbury must assess the risks from more extreme weather events than what the current District Plan does. We also need to take into account climate change effects over the next 100 years, such as increased frequency and intensity of rainstorms”, says Rachael.

“As a result we have now identified around 80 percent of properties in the district as being at risk of flooding that would potentially be at least five centimetres deep during a 200-year flood event.”

In addition to providing landowners with the information where on their property flooding risk exists, the Proposed Plan includes rules on how this risk should be managed.

“We’re proposing to manage flood risk with similar restrictions to what’s in the current District Plan.”

“For most properties the proposed changes won’t likely make much of a difference. The changes will only affect those who want to do something new on their land, such as build a new house or subdivide,” Rachael says.

For more information on the flooding hazard, check out the Council’s video with Robert Love, Strategy and Policy Team Leader. Make sure you have your say on the Proposed District Plan by 5pm Friday 11 December.